The Black British Business Awards acknowledges incredible Black Talent and Excellence in the United Kingdom, and I am so honoured to have been chosen as Senior Leader Finalist within the Consumer and Luxury Category. My own daughter is the inspiration for the Brand, and the journey as a solo entrepreneur has not been easy having to navigate through product design and creation, manufacturing, branding, marketing and sales.

Read the Official 2022 Finalist Announcement Press Release below published in The Telegraph on 27th July 2022.

Finalists have been announced for the 2022 Black British Business Awards, an annual event celebrating some of the country's top professionals and entrepreneurs.

Among the 36 businesspeople shortlisted are Patrice Gordon, director of commercial strategy development at Virgin Atlantic, John McCalla-Leacy, partner and UK head of ESG at KPMG, and Kené Umeasiegbu, campaigns director at Tesco.

Sophie Chandauka MBE, co-founder and chairman of the awards, who also works for Facebook’s parent company Meta, said the finalists are “recognised by industry leaders as individuals who are delivering extraordinary value, demonstrating relevance and criticality to some of the most systemically important global corporations following the cataclysmic events of 2020.

“Their works have been featured and celebrated in prestigious venues and festivals internationally including the BAFTAs, Cannes, Guggenheim Museum, Somerset House and The Africa Centre. Our entrepreneurs have ceased this moment to pitch for venture capital, digitise their businesses and compete in marketplaces that were previously impenetrable in the pre-George Floyd era.” 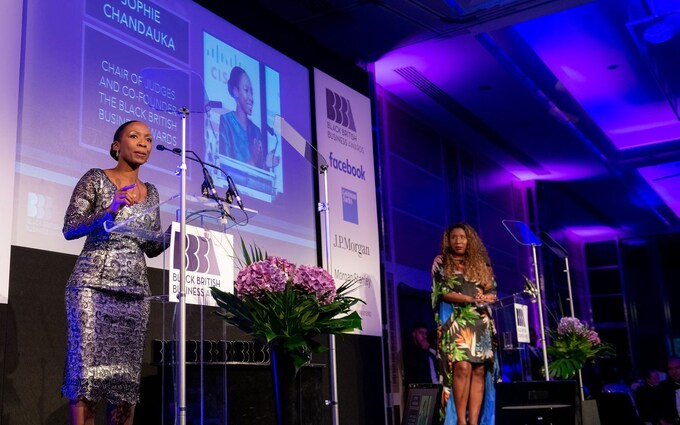 Sophie Chandauka MBE, co-founder and chairman of the awards, at the last in-person ceremony in 2019

This year's winners’ ceremony will be held in the City of London on Sep 29. The Daily Telegraph is the media partner for the awards.

Read more about the 2022 BBBAwards Finalists